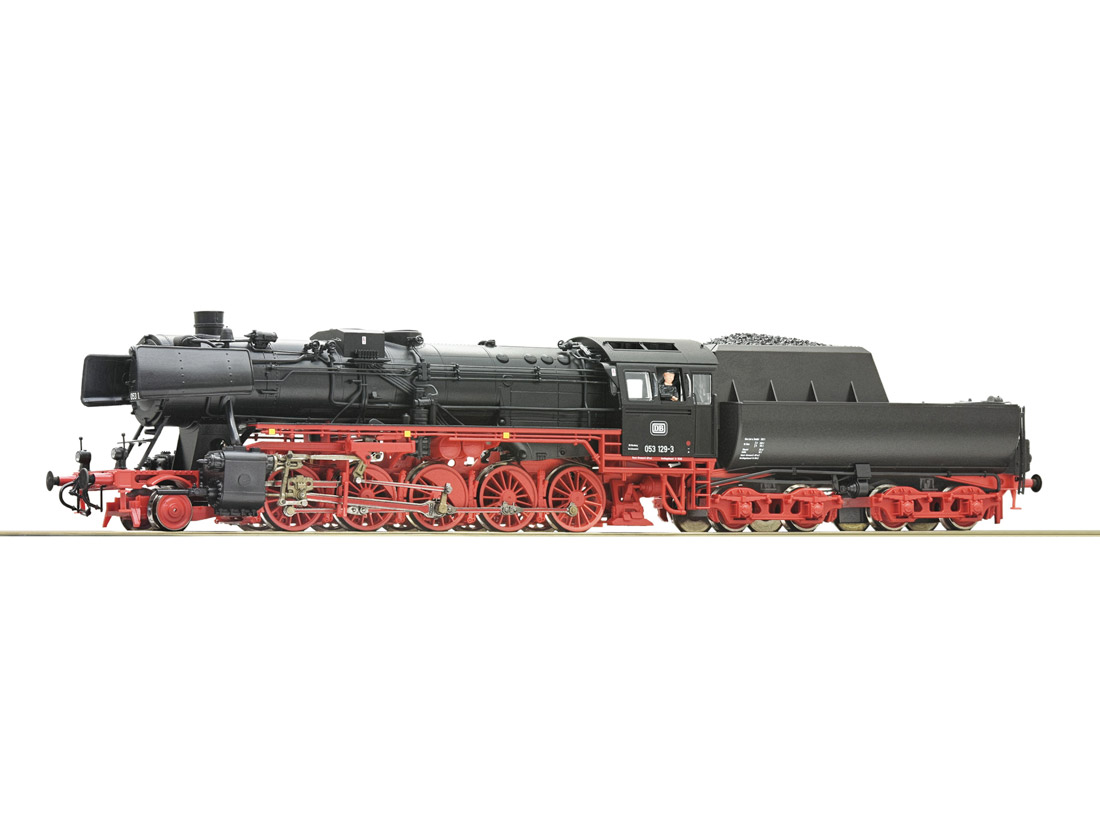 Roco
more articles from Roco
Model: HO gauge AC. Steam locomotive 053 129 of the German Federal Railroad. Version with tub tender, DB biscuit on the driver's cab and disc leading wheels, as well as fine detailing with separately attached plug-in parts and fine metal wheel sets. An etched shield set is included. Prototype: The class 50, probably the most important DB steam locomotive of the 1950/60s with many design variants, had proven itself in front of almost all types of trains on main and branch lines at that time. After all, more than 60 significant variants ensured that hardly any 50 had a completely identical appearance to a sister locomotive. The 1'E freight locomotives, which were built in about 3,100 units from 1939 onwards, were considered to be robust, powerful, easy to maintain and extremely reliable. After 1945, more than 2,000 locomotives remained with the Deutsche Bundesbahn. The locomotives reached a top speed of 80 km/h, had a power output of approx. 1,200 kW and an axle load of 15 t. When the EDP series scheme was introduced in 1968, 1,452 locomotives were still in DB's stock. Since the serial number could only have three digits, the designations 051, 052 and 053 were introduced in addition to the series number 050.
Accessories for this item:
H0 Steck-steam generator 16-22V
Seuthe
Item no.: Seuthe-11
21,80 €
incl. VATand excl. shipping
Go to the details
Founded in 1960 as a manufacturer of plastic products (sand buckets, miniature military vehicles), the company is now one of the world's leading providers of model railways as an innovation leader. The first locomotives were produced in 1976. The models were characterized by precision and authenticity right from the start and established the company's reputation for quality early on. In addition, Roco has always thought further about model railways and stimulated the industry with innovations. Over the decades, the wagons that are not shortened in length, the more prototypical tracks with less high rail profiles or the "snag-free" close couplings should be mentioned. A milestone for the future is the cutting-edge Z21 control system, which for the first time combines the virtual and real game worlds and thus raises the play value of model railways to a completely new level. Company headquarters are in Bergheim/Salzburg. Roco has a global presence and, via Modelleisenbahn München GmbH, is a company of Modelleisenbahn Holding GmbH, which also includes the German quality manufacturer Fleischmann. Roco relies on valuable and manual work. This is the only way to create the detailed, highly reliable and functional miniatures. Comprehensive quality management with internal and external quality assurance measures ensures that Roco locomotive and wagon owners receive the best quality and can enjoy their models for a long time. Here, too, Roco is a pioneer. The Roco factory in Arad was the first factory in the model railway industry to be certified according to ISO 9001 by the German DQS GmbH.
New in our shop