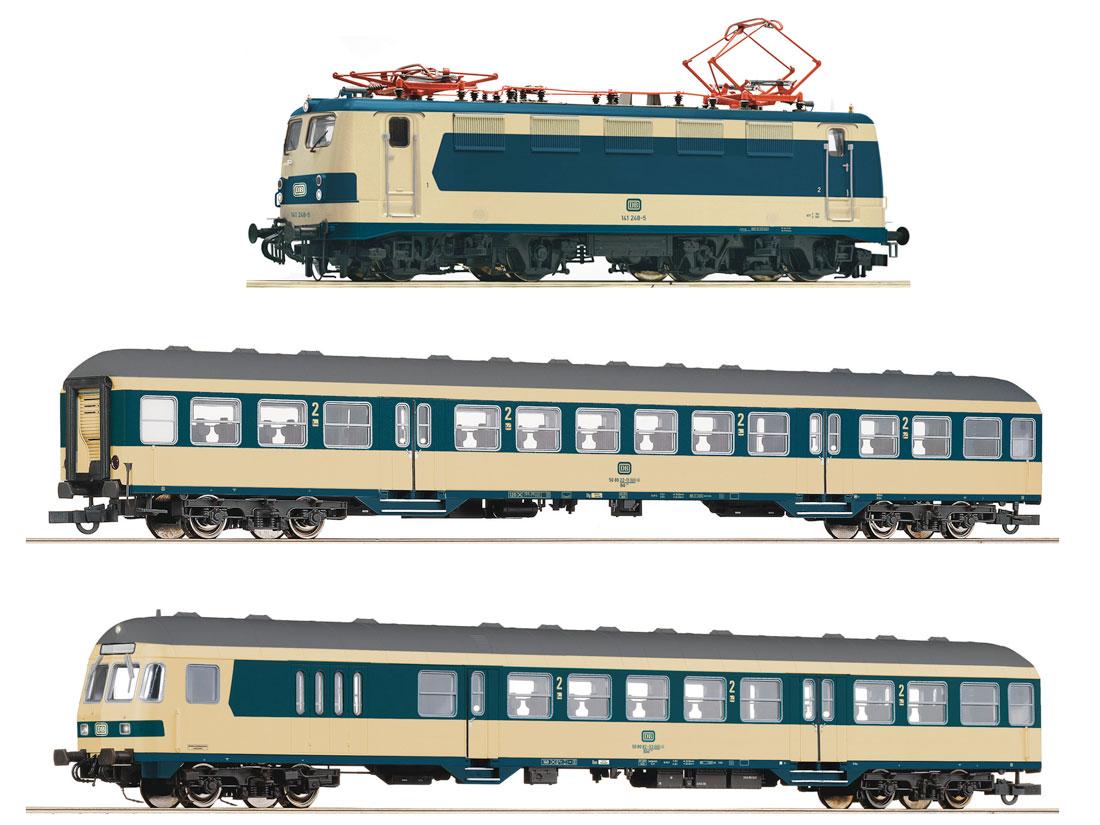 Roco
more articles from Roco
Model: HO gauge DC. The train set consists of an electric locomotive 141 248-5, a 2nd class commuter car (replacement car), type Bnrzb 725, and a commuter control car, type BDnrzf 740, in ocean blue/beige livery. The locomotive and wagons have an unusual test livery. Version of the 2nd class car as a replacement car. Prototype: In the mid-1970s, the repair shop in Karlsruhe developed three prototype cars for a push-pull train for the S-Bahn in the Ruhr area. Reasons for this were u. a. Complaints from travelers that there was no toilet in the ET 420 series railcars on the long routes in the Ruhr area. The silver pieces that were available in large numbers at the time served as the basis. The test cars received a new, clearer interior design. Instead of the rotary folding doors, the vehicles were fitted with swing-and-slide doors with electromagnetic door locks. Instead of the luggage compartment, seats were also installed in the control car. The carriages were painted in ocean blue/beige, with the windows band being ocean blue and the area under the windows being beige, in contrast to the other trains of the time. As a motive power, road number 141 248 from Hagen-Eckesey depot was painted asymmetrically to give a uniform appearance. In addition, two other normal pieces of silver were repainted as replacement cars. Ultimately, the train was not convincing in S-Bahn service, also because of the comparatively moderate acceleration of the locomotive. The cars were then used in normal local traffic, which was not possible without restrictions, however, since the entrances could only be used on elevated platforms.
Variations of this product:
Train set Karlsruhe train DB AC Digital Sound
Roco
Item no.: Roco-61485
former RRP 2): 548,90 € Your savings: 10%54,89 €
494,01 €
incl. VATand excl. shipping
Go to the details
Train set Karlsruhe train DB Digital Sound
Roco
Item no.: Roco-61484
former RRP 2): 538,90 € Your savings: 10%53,89 €
485,01 €
incl. VATand excl. shipping
Go to the details
Founded in 1960 as a manufacturer of plastic products (sand buckets, miniature military vehicles), the company is now one of the world's leading providers of model railways as an innovation leader. The first locomotives were produced in 1976. The models were characterized by precision and authenticity right from the start and established the company's reputation for quality early on. In addition, Roco has always thought further about model railways and stimulated the industry with innovations. Over the decades, the wagons that are not shortened in length, the more prototypical tracks with less high rail profiles or the "snag-free" close couplings should be mentioned. A milestone for the future is the cutting-edge Z21 control system, which for the first time combines the virtual and real game worlds and thus raises the play value of model railways to a completely new level. Company headquarters are in Bergheim/Salzburg. Roco has a global presence and, via Modelleisenbahn München GmbH, is a company of Modelleisenbahn Holding GmbH, which also includes the German quality manufacturer Fleischmann. Roco relies on valuable and manual work. This is the only way to create the detailed, highly reliable and functional miniatures. Comprehensive quality management with internal and external quality assurance measures ensures that Roco locomotive and wagon owners receive the best quality and can enjoy their models for a long time. Here, too, Roco is a pioneer. The Roco factory in Arad was the first factory in the model railway industry to be certified according to ISO 9001 by the German DQS GmbH.
Customers who bought this product have also purchased the following items: 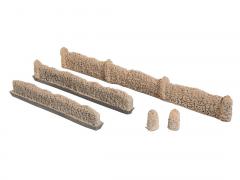 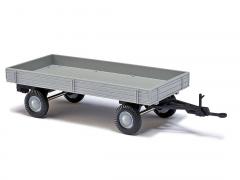